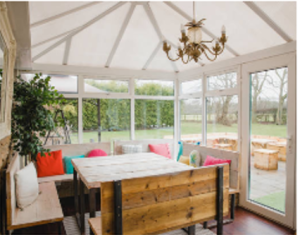 Sunrooms, conservatories, or Florida rooms, whichever name you want to call these sun-filled additions, they are sure making a comeback.

They were previously prevalent in the mid-20th century, but now it’s what everyone can talk about.

When you think of a sunroom, think luxury, it’s a blend of indoor/outdoor living only you don’t have to worry about the weather change or bugs disrupting your sunny morning or dinner cocktails with friends.

Well, there’s just one question: do you want a three-season or four-season room addition?

As the name implies, a three-season sunroom serves you for three seasons: spring, summer, and fall, whereas a four-season sunroom covers all four seasons.

Sunrooms look the same; the only difference is the way they are built.

Besides these differences, these two styles of sunrooms are basically the same; they both feature vinyl windows and walls, and whichever you choose has to match the style of your home.

Because they bring a luxury feel, they can be pretty expensive. Most homeowners often opt for three-season rooms because they are less expensive compared to the four-season room.

And also, why pay for an extra season when you won’t use the room in winter? That’s the argument for most homeowners.

Generally, we recommend a four-season room, simply because it’s better to have options you don’t use rather than missing one you wish you had.

However, the decision lies on you as the homeowner; you do what you feel is right for you.

We are a reliable remodeling contractor for gazebos, pergolas, additions, and any other remodeling project.

If you’re looking to hire a contractor, we are available to serve you in Midlothian, VA.

« Should I Get a PVC or Wood Fence?
Why You Should Consider Building a Gazebo in Your Yard »

Contact us today to see what we can do for you.